Today I set up wireless network in my house and secured it, despite the challenge of non-Vista-compatible software. Now I can blog while watching TV.

Sometimes the little things make all the difference.

Ok, so this was actually released on 5th January and I’m running a bit behind. A quick glance at the Hub website reassures me that they are too.

The first issue of the year is always the flash fiction issue and thus has more than one story. Issue 72 has four stories of varying lengths; they define flash fiction quite broadly I think.

Quartermaster, Steve Cooper. This is about 500 words and I think the best story in the issue. The quartermaster is about to do something and we find out why. It’s deftly handled and left me feeling quite disturbed. 500 words is not a lot of space and no word is wasted. We know a lot about the world, about the protagonist, and about the terrible decision he has to make.

Day Trippers, Ellen J Allen. Locals save tourists from supenatural being in the moors. This didn’t work for me. There was a lot of dialogue, most of which was used to give the backstory, and usually that’s a good thing but in this case, it was stilted. There wasn’t much tension and the whole feel seemed to be one of resignation. At around 1500 words, it seemed too long to count as flash fiction.

The Girl in the Rose-Tinted Glasses and the Man in the Mirrorshades, DJ Muir. Not keen on the title. I usually don’t offer an opinion on titles because it’s something I find really hard to get right. I do think this title is too long. The story was a bit strange. It was well written and at 900 words, short enough to feel like flash fiction. But I didn’t really know what it was about. At the end, I got the impression it was an allegory for the turning of the wheel, the changing of the seasons. Or it might have been about two assassins and their perpetually reincarnating target.

The Harvest of the Machines, RJ Smith. This is the longest story at nearly 1700 words and is post-apocalyptic sf. Mostly I liked this. The narrative is quite compelling and the story is revealed at a nice pace. The tone is reflective and normally I wouldn’t enjoy that, but there is a lot behind this story and this style of telling it gets it done in few words. Told as action – as if the reader lives it with the narrator – then there’s enough here to make a novel. I hated the ending. It felt weaselly and changed the whole slant of the story.

I’ve been pondering this one for a while. A few weeks ago I stumbled across a radical feminist critique of one of my favourite shows, Firefly. My first reaction was ‘no, say it isn’t so!’ and my second was ‘maybe she’s got a point’. I don’t intend to address the arguments about Firefly, as that’s been done here and here.

What I do want to talk about, and what has been occupying my mind ever since, is what is it I do when I write. How much prejudice of any type is revealed in my writing because I am unconscious of it? I think writers want to show people as they actually are – and that sometimes means characters who are bigoted in various ways. That means characters who think they are not prejudiced but reveal by their words that they are.

Lately I’ve read novels and short stories where characters that are not white are described by their skin colour. It’s niggled at me and is possibly a sign that my consciousness has been raised a smidge. A white male character is just ‘a man’, whereas a black male character is ‘a black man’. It would be fine if all white male characters were described as ‘a white man’. Why does the black character need to be identified by his skin colour rather than some other characteristic individual to him? What it reveals is the (unconscious) assumption on the part of the author that white is the norm and that any deviation from this norm needs to be flagged to the reader.

Of course writers have to describe people and it’s nice as a reader to have some physical information to base their imaginations on. But in most cases does it matter if the reader is visualising your character as white or black, gay or straight? How often is it really relevant to the story or to character development? And when it is, it can be just about the individual rather than applying a label.

The trouble is, people use shortcuts and labels. In order to cope with all the information we process everyday, our brains code things. It’s even better if the people around us use the same codes. This is how stereotypes and tropes and mores get born. It’s why we have misunderstandings – because my word ‘woman’ might have different associations to your word ‘woman’. We need assumptions to get through even the most basic conversation.

I think as a writer, I need to have greater awareness. This is for entirely selfish reasons; I want to control what my words say as much as is possible. I don’t want to be misunderstood because I wrote something lazy, muddled and ill-considered. I think I’ve been a bit complacent about being tolerant and inclusive and that I have a bit of work to do in identifying my assumptions.

I went to the British Museum for their Babylon exhibition this week. It was wonderful and very inspiring.

The Long Way Home is a fantasy novel I wrote a couple of years ago, still languishing in first draft status, and it has a middle eastern themed world. The pictures and model of the Processional Way and Ishtar Gate gave me some good ideas for imagining my protagonist’s home city. When I get back to it, after I’ve finished Sacrifice… 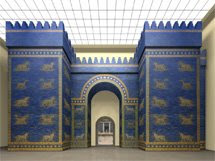 Statuephilia is a collection of contemporary sculpture inspired by the exhibits at the BM. This is my favourite, Dark Stuff by Sue Webster and Tim Noble. It’s really disturbing.

Then I had afternoon tea in the Great Court restaurant and worked out the plot for Alexandria. Apparently high blood glucose is beneficial to writing. I do so enjoy being told what I want to hear.

This month there’s an article on the pros and cons of websites for aspiring authors.

There’s also a handful of competitons, including one for which I got flyers in the post last week. I’m not sure how I feel about non-genre-specific competitions. I have an instinct that genre stories don’t do very well in these things and they’re looking for something more literary, regardless of the quality of writing. Having said that, I don’t pay much attention to the winners so if anyone knows of speculative fiction winning a competition that wasn’t specifically for speculative fiction, I’d be interested.

Hub Magazine has a new website and it looks great.

Issue 71’s story is The Watchers at the Window by Marie Faye Prior. It’s good. The initial hook seems a litte weak but she so effectively creates a character completely ill at ease in his surroundings that it doesn’t matter. The sense of stress, grime and fluid reality is well conveyed. I liked the ending. It was kind of sweet, in a twisted way.

I entered an opening paragraph in the Electric Spec mini slush pile game and editor Betsy has commented.

I’m really flattered with the comments and I agree with the points about waffly and vague adjectives. When I start a new story, I start with a mood or a scene. Plot comes when I have to think about what I’m going to do with the result. Often my terms are vague initially because I haven’t made decisions about the things I’m describing. These are the sorts of things I would have tidied up if I’d finished it.

Unfortunately, editor David’s comment that this is an overdone plot is true and I couldn’t think of a way to resolve it that didn’t read like a complete rip-off of Logan’s Run.

So, now I’m going to polish up Alexandria (working title) and send it off to Electric Spec.

Of the four, Nesting Instinct is the best. It may be a result of the dystopian theme but I found the stories hard work. Too much telling, too much description of a future world and not enough story for my taste. All of the stories lack action and dialogue; character and plot are sacrificed in favour of describing the dystopia.

Still, Crossed Genres is a new magazine and I’m willing to give it a few more issues to see if the quality varies with the theme.

They have announced that with Issue 4, Crossed Genres will become a paying market. They are looking for fiction, articles and artwork, so see the submission guidelines for more information.