I’ve become fed up of reading short books in order to hit my 100 books for the year target and was feeling the need to get into something more substantial. The Girl who Played with Fire by Steig Larsson is the second in the Millenium trilogy and is a 650 page brick.

Lisbeth Salander is hiding out in the Carribean, having had some cosmetic surgery and done a bit of travelling. She’s wondering what she will do with herself now she doesn’t have to work for a living.

Blomkvist is working on an expose of the sex trade in Sweden. Salander comes back and starts to pick up the pieces of her life, including checking in on her guardian and making sure that she is on track to be declared competent. But her guardian has hired a hitman to kill her. Then the journalists Blomkvist is working with get killed and it looks like Salander is the murderer.

The police investigation focusses on finding Salander but Blomkvist doesn’t believe she did it and does his own investigation. Salander takes matters into her own hands. All three investigations come together in a tense climax with some interesting revelations, which hopefully will be expanded on in the last book.

This book was actually a little better than the first one. It still suffered from a lack of editing, especially visible in the frequent summing up passages. It probably could have been a hundred pages shorter without losing anything.

The dialogue is stiff and stilted but the pacing of the action sequences is good. The plot and story line are really exciting and the characters are becoming more rounded and engaging. I wouldn’t make this top of your reading list, but it is worth reading.

Tyrion and Penny are being sold in a Yunkish slave market: one which has been set up outside the walls of Meereen, while the Yunkish beseige Daenerys.

The bidding slows at 1000 pieces of silver and they do a bit of a joust. The bidding picks up. When it slows again the bidders come for a closer look. Then a sellsword enters with a high bid and Tyrion realises he has been recognised. He bids for himself, as a Lannister. The bid goes up and in the end they are sold to Yezzan zo Qaggaz, the fat Wise Master who collects grotesqueries. Tyrion reckons he could make a break for Meereen but it would mean leaving Penny behind.

Jorah is sold after them. Tyrion tells Qaggaz’s slave master Nurse that Jorah is part of their act, as a bear, and Qaggaz buys him as well. They had heard that Daenerys has married and Jorah is devastated.

They are taken to Qaggaz’s camp. Tyrion sees slaves being whipped and killed for trying to escape. He also sees that there is flux in the camp. They get collared and taken to Qaggaz’s tent. Jorah is chained up outside and the dwarves put in the grotesquerie.

That evening they perform for Qaggaz and the Yunkish supreme commander. A lord recalls that Tyrion boasted of his cyvasse skill so he plays. Ben Plumm tries to win him as he lost the bidding but he loses at cyvasse too. Nurse tells them they will joust in the Great Pit.

So, does that mean the Great Pit in Meereen? Will Daenerys recognise Jorah? What will happen then?

Tyrion is a bit soft-hearted really and it’s nice that he’s trying to take care of Penny and Jorah.

The second book of the Twilight Saga by Stephanie Meyer is New Moon. In this part Edward leaves Bella, for her own good natch, and she goes into a big funk for months. Then she discovers that if she engages in activities that could kill her, her subconscious provides an hallucination of Edward being all domineering. She hangs out with Jacob who falls in love with her and turns out to be a werewolf. Bella wonders if she can settle for being adored by someone she can’t love but then discovers Edward has gone off to get himself killed because he can’t live without her. 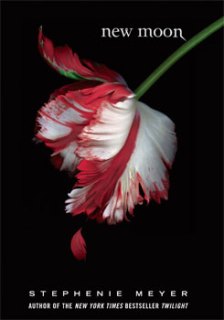 Bella goes off to find Edward in the company of Alice (Edward’s sort of vampire sister), meets lots of scary vampires who like to eat people, and brings Edward back. She bangs on a lot about wanting to be a vampire.

There’s even less plot in New Moon than there was in Twilight and even more disturbing relationships. The quality of the writing has slipped a bit from the first book and doesn’t seem quite as polished. It wasn’t as engaging and afterwards I felt a bit dirty.

Now I really understand what the issue is with these books. Twilight was ok, really it wasn’t any worse than your average romance novel. But New Moon takes it to another level. Bella only regains any happiness when imaginary Edward is abusively yelling at her in her hallucinations.

Then there is a really telling moment at the end. Edward has been his usual terse, controlling self who appears to only speak to Bella in order to correct her, admonish her or berate her over something. He acts as though he hates her. But for a moment, at the end, after he has left her and tried to kill herself, he makes a speech about how he loves her to distraction really, and all his arsehattery is because he loves her so much. It was a little out of place and read like the sort of thing the author wishes someone would say to her.

It is tragic that this resonates with so many women and girls.

So, only I few posts ago I was banging on about posting daily and then I go on a three week blogcation. Life happened, sorry about that. I’m busy at work and got a bit sick.

The other reason is that I have started playing World of Darkness roleplaying games and they are awesome. It’s like character creation boot camp and I am doing loads of writing practice.

Normal posting will be resumed, although it might be a while before I get back up to daily posts. Still, it’s good to have a goal.