Still on the search for a romance I can enjoy…

I ran out of book while I was at work so went raiding the book drop. I wasn’t feeling that mentally energetic so I went for an easy read. And I’m still looking for that sweet and sexy feminist romance. At this rate I might have to write it myself. Please leave any recommendations in the comments!

Stupid Cupid by Arabella Weir is the story of a woman who persists with a wedding despite the absence of the groom. Hat is dumped by her fiance, Jimmy, about six weeks before their wedding. She’s in shock and without any better idea, she just continues with the wedding train. Part of her thinks that Jimmy is just having cold feet and will change his mind. Part of her just doesn’t want to deal with calling off the wedding. And part of her wanted a wedding far more than she wanted a marriage.

The weeks pass quickly and the situation is complicated by Hat’s perfect sister and hypercritical mother. A friend suggests a beard; Hat should have a stand-in pretend to be Jimmy and go through with the wedding with her. Said friend just happens to have a suitable man to hand. Naturally, Hat finds the new chap much more to her liking.

It was ok. Not nearly as infuriating as the last romance I read and Hat was a reasonably rounded character, even if she did suffer from low body-confidence and too much self-deprecation. The supporting characters were a little stereotypical and included the gay best friend and louche old lady. It’s supposed to be a comedy but it didn’t make me laugh. My taste isn’t for farce though, so if you like that sort of thing, you might enjoy it more than I did.

The 7 Secrets of the Prolific: The definitive guide to overcoming procrastination, perfectionism, and writer’s block by Hillary Rettig is one of the most useful books I’ve ever read. I was struggling to finish a novella manuscript. I don’t really get blocked; I can always write something and I have numerous projects on the go. What I struggle with is completing a piece.

It turns out that the problem is perfectionism. I’m alright at the start of a project when I have this amazing idea in my head and I have the whole book to realise that vision. As I go on, I run out of time and become increasingly aware that what’s on the page is vastly inferior to what I imagined. I know this. The problems perfectionism causes me are legion.

There was a lot in this book to help, mostly focussed on what perfectionism actually looks like in your life. I know I’m a perfectionist and I know how that happened. What was eye-opening was attributing some of the things I do around procrastinating to perfectionism. My inner voices would have me believe it’s laziness, but my inner voices are full of shit and need to shut up.

The proof of the effectiveness of this book is that I finished the novella. I am currently editing it and preparing it for submission to publishers. I got over the mental blocks that were making it hard, painful and slow. I got past the need for it to be perfect and began to be able to appreciate what I’d achieved.

The 7 Secrets of the Prolific is self-published and there’s a chapter in the book extolling the virtues of self-publishing and how to do that in a professional manner. It was thought-provoking and made me reconsider whether I would self-publish a novel.

This is a great book, I got so much out of it, and I highly recommend for anyone with procrastination issues. 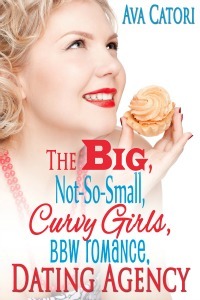 It turns out I don’t like writing reviews of books I really didn’t enjoy. (Even though I do it a fair bit). I’ve been putting this one off for some time.

Romance isn’t my normal genre and it’s not a favourite, but I occasionally read it because sometimes I do want a romantic story. Unfortunately, it seems that I what I consider romantic isn’t the same as the romance genre and I’m often disappointed. Also, I claim to read widely and sometimes I have to prove it. 😉 When I bought The Big, Not-so-Small, Curvy Girls, BBW Romance Dating Agency I was looking for something sexy and sweet and easy to read. And if not too much to ask, non-stereotypical gender roles. That was too much to ask so I settled for a protagonist that is fat.

What I got was depressing and infuriating. The main character Becky, wants to start her own business, a dating agency for big women and men and those that appreciate them. A laudable goal, except the book was written in 2013 and it doesn’t appear to have occurred to her that online dating is a thing. There are loads of websites, catering to all sorts of persuasion, from people wanting to date within their own religion to people looking for a specific body type. She’s got a lot of competition.

Becky is self-deprecating to an off-putting degree. While it might be realistic that she’s insecure about whether or not the object of her affections likes her back, I really wanted to read about someone positive, assertive and body-confident. Becky’s best friend Sam seemed a bit like that and I would rather have been reading about her.

The other thing that annoyed me may well be a trope of the genre and not specific to this book. I don’t read enough romance to know. Becky and Reed (said object of affection) spend a lot of time mooning about how lovely and amazing the other is, how they like them more than they should (Diet Coke ad type beefcake Reed has a model girlfriend, who is conveniently unpleasant), and how they are falling in love with the other. All this is based on very little interaction. They are declaring undying love after about three short dates. I spent much of the book frustrated with the total lack of a basis for liking each other. I don’t know how difficult it would be to write a romance where two people develop affection for each other through shared interests and spending a lot of time together, but I suspect it would be hard. And lack drama and be a bit dull for the reader. Even so, the intense emotional reactions appeared elicited by the mere sight of the other and wasn’t convincing at all.