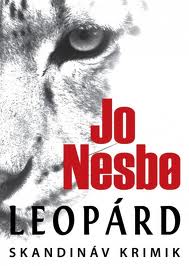 The Leopard by Jo Nesbo is the sixth in the Oslo sequence featuring detective Harry Hole.

It starts with Harry on a massive bender in Hong Kong. He was going to Thailand but didn’t make it that far. He’s a mess, having rung up large gambling debts and indulging a heroin habit. Because that’s less of a problem for him than alcohol.

Back in Oslo, two women have been found dead with mysterious wounds to the face. The police are fighting a political battle for jurisdiction over murders with Kripos, who are responsible for tackling organized crime. Harry’s boss wants him back to solve the crime and to stick it to Kripos. He sends detective Kaja Solness to bring Harry back.

In turns out that there are more than two murders and the connection between them is not simple. Nesbo serves up several red herrings and twists and keeps the reader guessing right to the end. I loved this. The plot was gripping and expertly handled. There is treachery and intrigue amongst the police and the perpetrator was deliciously complicated. There are lots of threads and none of them are left loose at the end.

It’s in this book that it’s made most clear that Harry’s flawed character is the reason he’s an exceptional detective. Writers are urged to give their characters a flaw to make them human and enable the readers to identify with them. I think it’s true to say that most fictional detectives are flawed and that alcoholism is very popular as said flaw. In the previous books in the series, Harry’s alcoholism is treated in a fairly standard way. He’s an arse and he’s difficult to work with, he’s unreliable and unstable. But he’s a great detective by virtue of persistence and making connections others don’t, so his bad behaviour is excused in favour of his results.

In The Leopard, Nesbo shows how Harry’s flaw is the very thing that makes him great. His addiction is integral to his excellence. At the beginning of the book Harry is on a bender because of the impact his previous case had on him. He doesn’t want to chase serial killers again. He wants oblivion. Harry resigned from Oslo police but they bring him back. At first he resists but he finds he can’t help himself. He has to follow the threads, he has to work out what has happened and who did it. Harry is addicted to solving crimes.

For me, this is the best Harry Hole so far. I really enjoyed it. 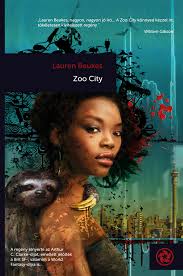 Zoo City by Lauren Beukes is set in a world where those who commit crimes gain animal companions and psychic powers. It’s not considered a good thing and those with animals sink to the bottom of the pile, making a living however they can.

Former music journalist, murderer and junkie, Zinzi December finds things that are lost, for a fee. After a job goes south, she’s offered an opportunity to make a lot of money finding a missing girl. It’s not what she normally does, but the money’s too good to pass up. Naturally, nothing is as simple as it seems, and when she finds the girl she uncovers a much bigger, nastier crime.

This is brilliant. It’s written in the first person present tense and Zinzi’s voice is compelling and funny. The plot is deep and tightly woven. It all makes sense at the end, and everything you need to know was always right there, masquerading as worldbuilding. I loved the concept of the animals and the powers and I loved the dystopian alternate world. I would highly recommend it.

Focus by Daniel Goleman is about awareness. There are three levels of awareness and if you can master each and master switching between them appropriately then excellence will be yours. Assuming that’s what you want.

The three levels are: awareness of your inner state; awareness of what’s going on between you and other people; and awareness of the wider world. Lots of this happens in your subconscious because your brain isn’t under your control. You are the narrator for the adventure your body is having. But if you can manage to stop distracting yourself with sensation and pesky emotions and actually pay attention to what you’re doing/experiencing in the moment, you’ll be happier, more productive and achieve all your goals.

There’s a lot of good stuff in here, although not much that’s new. Goleman spends quite a bit of time talking about emotional resilience and the importance of learning to distract and soothe yourself. He also talks about the need to scan and take information in so that your subconscious can do the heavy lifting of making connections between unrelated things that is key to creativity. There’s a difference between focussing narrowly on a task at hand to get it done, and a more wide-ranging focus on gathering data, and how both are necessary. Goleman also talks about when it’s helpful to be unfocussed, because that too is important in creativity. Mindful daydreaming, if you will.

I wasn’t keen on the tone. According to Goleman, the world is going to hell in a handbasket due to the pernicious effect of modern technology. And climate change, and obesity, and lack of wholesome outdoor pursuits. Everything was all better in the past when people had real conversations without texting someone else. There’s a lot of assumptions masquerading as evidence and a lot of nostalgia for a never-was golden era. Which rather spoilt it for me. 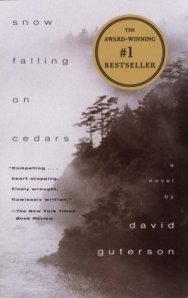 Snow Falling on Cedars by David Guterson is the story of a murder trial and all the social and cultural factors that lead to a false accusation. It is set on an island off the coast of Washington State in the US where the main industries are timber, soft fruits and fish. The island has a small population with a minority of Japanese inhabitants who were all interned during the war.

Guterson switches between the murder trial in the present of the book, which is the early fifties, and the past of the events that link the deceased and the accused together. These events span thirty or forty years and include land deals gone sour, racism, unrequited teen love, war trauma, lazy detective work and some really bad luck. The switches are handled effortlessly and sometimes happen within a paragraph. Much of the book is spent in the past and on the love story between the Japanese wife of the accused and her childhood friend, the son of the white newspaper owner.

This is a dense and long book. Guterson creates a lushly detailed picture of the island and what life on it was like. I saw the film a few years ago and enjoyed it. I had a suspicion that there might be more to the book and there is. The author touches on some big themes and handles them delicately. The final reveal of what really happened to the deceased shows how all those other things led the Sheriff, the coroner and the Judge to jump to conclusions and stop looking for evidence.

It was slow going but for the most part absorbing, beautifully written and thoughtful.

I’m getting the opportunity to get lots of training at work at the moment, and that usually comes with book recommendations. The Inner Game of Work is about coaching, and written by W. Timothy Gallway who revolutionised tennis coaching by focussing on inner resistance rather than technique. The idea is that performance is as much about what’s going on in your head as it is about skill and ability. Negative self-talk can drag down the best players.

The Inner Game of Work talks about learning, focus, finding your joy, and awareness. Which is great, but it’s long on theory and short on practice. It asserts the importance of being present and being in the moment but offers little guidance as to how you do that. You’ll have to turn to other books for that. It was pretty hard work reading it but there’s some useful ideas.

I did like the section on thinking like a CEO. It challenges you to question whether you are actually in charge of the corporation that is you or whether you’ve given decision-making responsibility to others. These are ‘stakeholders’ such as family, employers, friends, and anyone else who has an opinion about how you live your life. I like to think of it as being master of your own ship because I was a pirate in a past life, but the CEO metaphor works as well.

I am on the lookout for a writing coach in the London area though, so if you can recommend someone, let me know in the comments.

Having enjoyed Poppet so much I thought I would read all Mo Hayder’s Jack Caffrey thrillers. I like to do things in order.

I feel a bit mixed about Ritual. It was a good thriller. I enjoyed the plot and thought it was well handled, keeping the identity of the killer hidden until the very end. Caffrey has transferred from London to Bristol and his first case is a hand recovered from the harbor. The coroner confirms that the owner of the hand was alive when it was cut off and may still be alive. All the pieces are skillfully woven together so that you only see the whole, gruesome picture at the end.

Caffrey is working with Flea, the police diver, and the events that are between them in Poppet begin here. So, it was nice to start to piece that story together as well and I like the connecting thread between the books. There is also a little bit of follow up to the actions Caffrey took at the end of Birdman and the impact on him that has had. Rather than being a series of individual thrillers connected only by the central character, like the Reacher series, it has the feel of episodes in a series building up to something bigger.

There was one thing that bothered me though. The Jack Caffrey in this book didn’t seem like the same character as in Poppet, Birdman or The Treatment. Some of that was physical characterization. After reading those three books I had an image in my head of Caffrey as tall and blond. In Ritual, Hayder describes him as dark-haired. That might be inconsistent, or it might be me misremembering. The tall thing is more clear-cut though. In this book, Hayder repeatedly describes Caffrey as tall. Then she describes him through Flea’s eyes as being medium height. It really bothers me and I’m not sure why.

Overall, it was alright. I did enjoy it, but perhaps not as much as some of the others.