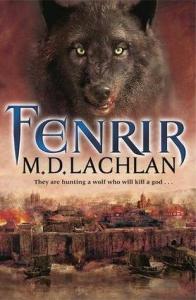 Fenrir by M.D. Lachlan is the sequel to Wolfsangel and is really the same story. I’ll explain what I mean in a moment.

In Fenrir, a merchant is sent to bring a French noblewoman from Paris to Rus king Helgi because there is a prophecy that Odin will manifest on earth and trigger Ragnarok. The characters from Wolfsangel (Valli, Feilig and Adisla) are reincarnated in the characters in Fenrir, along with Odin and Fenrir, and it is not clear who is who. The merchant is accompanied by a mysterious warrior to protect him, as he is not the only one seeking Aelis, the noblewoman. The Vikings beseiging Paris also want her, as do two Viking shamans.

Aelis has her own ideas about this, which is nice to see, and takes charge of her own destiny in a way that feels consistent with her Christianity and the early medieval setting. It’s a gripe of mine that writing good female characters in historical settings means giving them modern sensibilities rather than fully embodying that character in time and space.

The characters are variously working for or against the manifestation of Odin and Fenrir, sometimes both. Lachlan manages to effectively convey a sense of confusion. None of the actors is sure what it is they are supposed to do and are wary of inadvertently bringing about the thing they seek to prevent.

Fenrir has a different style to Wolfsangel. Initially, I missed the lyricism and the mystical atmosphere of Wolfsangel, but I was soon drawn into the story. The change in style reflects the change in setting and underlines that this is the second cycle of the myth. It is the same, but not the same. In the end, Ragnarok is averted, but Odin and Fenrir will continue to try to manifest and the story will play out over and over again, until one day they meet and the end of the world begins. I enjoyed this and I’m looking forward to reading the next two cycles.

Honourable Friends by Caroline Lucas is a tour through her experience as a Green Party MP over the last five years and a look at the work she’s tried to progress.

Part of the book describes what it was like to enter Westminster when Lucas was first elected, with no party machinery in place to support her and no experience of the strange traditions of the place. Part of the book is a discussion about the change Lucas wants to see in both policy and procedure. A chapter is devoted to subjects like the environment, the NHS, housing and foreign policy. Lucas describes how she’s worked to find support from MPs in all parties and where she’s succeeded or failed. She points out how some of the ‘quaint’ archaic traditions of the British parliament hold back progress and block democracy. For example, Lucas talks about how voting works and how the process gets in the way of MPs giving votes serious consideration, or about how MPs are appointed to committees or reviews and how knowledge and experience is seen as unnecessary.

The book has a tone of ‘if people could just see how dangerous these policies are, they’d all change their minds’, a kind of bafflement that anyone could think austerity was a good idea. I’m not sure it’s a sophisticated persuasion technique, but I suspect Lucas is preaching to the converted with this book.

If you’re interested in the mechanics of how politics is done in the UK, or how democracy is expanded or contracted, then there is a lot of detail in here. Lucas’ style is conversational and it’s an easy read. I enjoyed it. 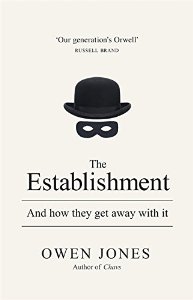 In The Establishment, Owen Jones argues that the establishment is not so much a group of wealthy people in cahoots to keep everyone else down, but rather a collection of people with shared beliefs who benefit from being able to influence each other.

The establishment hasn’t remained stable over the years and those that are considered to make up today’s establishment are not the same as those following WWII. To start with Jones charts the shift in the political consensus from the 1940s to now. Once upon a time, free market ideology was fringe thinking and considered a bit barmy. Jones shows the methods by which more and more influential people were convinced by it’s proponents. It shows how money can be used to change people’s thinking. There are lessons there for those who wish to shift the political consensus back towards the centre, but the lesson is that money speaks and money corrupts.

Jones looks at each of the groups whose members make up the establishment and shows how their interests align and complement those of the other groups. The chapter on tax avoiders was particularly illuminating. The involvement of corporations and huge consultancies in the process of writing legislation and regulation enables those corporations to manipulate the system in their favour. The revolving door between politics and business has serious implications for democracy. To be clear, Jones never claims this is a conspiracy. There’s no group of people sitting in a room somewhere cackling and stroking white cats. Much of this is the unintended and unexamined consequences of people pursuing their own interests.

I found the discussion about ownership of the media and their relationship with their readers interesting. Papers don’t report what they think their readers want. They report what their owners and advertisers want. He shows (and he’s not the first) how the pressure to maximize profit compromises investigative journalism.

The Establishment is a dense and lengthy read. I found it thought-provoking and stimulating and would recommend it to anyone interested in how politics works.

How have I waited so long to read The Handmaid’s Tale by Margaret Atwood? It’s a classic, and has been televised, and is the kind of thing that sometimes you don’t read because you think you know all you need to about it. The Handmaid’s Tale was published in 1985 and I really should have read it long ago.

Sometime in the 20th century a Christian extremist sect sets up a totalitarian theocracy in the US. The handmaids are a caste of women able to have children which is now a rare ability, due to widespread sterility. It’s not clear if that because of environmental toxins or out-of-control STDs. Offred doesn’t know what’s true and what isn’t, so neither does the reader. The ruling elite use propaganda to create the beliefs they want the populace to have, and much of what the narrator, Offred, relates is what she’s been encouraged to believe. The parallels between that and the distortion of reality created in today’s media are striking.

Offred describes her life, her illegal relationships with the Commander and his driver, Nick, and her eventual escape via an underground railroad. It is compelling. The claustrophobic nightmare of Offred’s life is vivid. What struck me the most was the boredom. Offred has nothing to do. People are not permitted to read or to write and a handmaid’s only role is to breed. Offred is allowed a daily trip to obtain rationed food but she has no other role, so she spends a lot of time on her own in her room doing nothing. There are exercises and prayers but Offred is not a true believer.

I was gripped by the story. I’d expected, as it was published in 1985, to find it dated. Scarily, the opposite was true. It seems like a future that is only a couple of steps away. One or two wrong turns and we could easily end up there. Atwood’s realisation of the impact of living in a totalitarian society is chilling. It’s an important book and is still relevant. If you haven’t read it yet, don’t wait any longer.

Buy my book Fragments at Amazon or Smashwords.