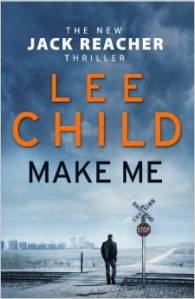 Regular readers of this blog will know that I’m a fan of Lee Child’s Jack Reacher books. They’re a comfort read. I know what I’m getting and I know I’m going to like it. I don’t expect to be surprised.

In Make Me, Reacher arrives in a small town called Mother’s Rest. He’s there on a whim, just wanting to find out why it’s called that. He finds an Michelle Chang, and ex-FBI private investigator, waiting for him. Or, at least, someone who looks like him who’s missing. Of course, there are bad things afoot and Reacher and Chang set off on an trail that leads to Chicago, LA, San Antonio and San Francisco before the final reveal. Which I did not see coming. At all. The clues are all there, but so skillfully woven in that I didn’t put it together. I loved the surprise (well, not what it was, but the fact that I was surprised) and I enjoyed this book enormously.

I also got a writing tip from it. Reacher gets a concussion in this book. It’s about time. He should get hurt a lot more than he does. Make Me is written in first person, so how do you show the effect of concussion on a character that refuses to acknowledge that he’s been hurt? Child does it through the presence of a headache but also by giving Reacher some out-of-character thoughts and feelings. It’s clear something is going on, but not clear what. Maybe Reacher is going soft in his old age and wanting to settle down. Nearer to the point where the concussion becomes unignorable, Reacher gets clumsy. Again, out-of-character. Then he faints and is taken to hospital. It’s at this point that I put together all the odd behaviours and realised what Child was doing.

Loved it. Can’t wait for the next one.