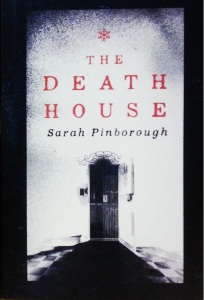 This is one of the free books I picked up at FantasyCon 2015. I’ve not read anything by Sarah Pinborough before but I have heard her speak at events.

In a post-apocalyptic future some people have developed a genetic mutation that reveals itself in the teenage years. It is so serious that children have regular blood tests and those that show the markers are removed from society. They are taken to homes where they are fed and watched until the illness presents itself and then they are taken to the sanitarium.

The Death House is the story of Toby and Clara who meet in the house and develop a sweet teenage relationship. It is beautifully written and the interactions of the characters are engaging and moving.

The trouble is I had expectations that something gory and gruesome was going to happen and it never did. I liked the book and I will read more of Sarah Pinborough’s work; she’s a great writer. I guess I had it in my mind that she was a horror writer of a more physical sort. The Death House is a lyrical horror of a more subtle type. 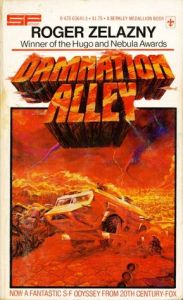 This was so much fun. In a post-nuclear holocaust America only the coastal cities have survived. Boston has a plague that threatens its survival and Los Angeles has the cure. A messenger made the crossing to ask for the cure but didn’t survive the effects of the journey. The continent is racked with radiation, storms, quakes, monsters and feral humans. Hell Tanner, a Hell’s Angel, is offered the choice between attempting the drive or going back to jail. The rest of the story is Hell battling the environment to take the cure to Boston.

It’s a fairly basic plot and is well handled. There’s plenty of tension and excitement and the success of the mission is often in doubt. The worldbuilding is excellent and the description of the impact of the use of nuclear weapons is vivid. I’m not sure how scientifically accurate it is, but it makes good fiction. A film starring Jan-Michael Vincent and George Peppard was loosely based on the book Damnation Alley, and, ye gods, it’s awful. The book is much, much better.

The characters were a bit sketchy. It’s a fast-paced action story, so the characterization takes a back seat. Hell is a seventies-style anti-hero who does a good deed only because he’s forced into it, but is cool in a laconic, anti-authoritarian way. The supporting cast is handled in what I think of as line drawing. There’s little detail and not much depth, but the impression of the character is skillfully conveyed in brief strokes of the pen.

Since I’m now reading a lot of sci-fi and fantasy written more than twenty years ago, I’ve started noting the publication date. Where I can, that’s original publication date, not necessarily the edition I read or of the picture that goes with the post. The reason for doing that is to try to build up a picture of changing representations of characters who are not white, male, able-bodied, cis-gender, or heterosexual and to see whether there is a pattern of change over time.

Damnation Alley has, as I recall, two female characters. One is a wife and mother of a family that give Hell food and healing half-way through the journey. There are a number of background characters and they are overwhelmingly male and white. Near the end of the book, Hell is chased by a biker gang. He kills most of them and one of the women joins him, but she’s only there for Hell’s sexual relief and conveniently dies soon after.

Despite the disappointingly predictable lack of diversity, Damnation Alley is extremely enjoyable. If like me, you like action, adventure and bit of silliness. 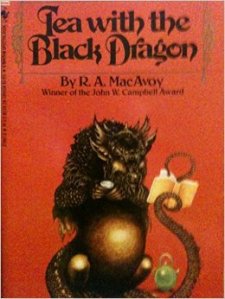 Tea with the Black Dragon by R. A. MacAvoy
Published 1983, Bantam Books

Martha Macnamara comes to San Francisco to see her daughter, a genius computer programmer, only to discover she’s missing. At the hotel Martha meets Mayland Long, an ancient black dragon taking the form of a human in order to seek enlightenment. Mayland is enchanted by Martha and agrees to help her find her daughter, Elizabeth.

This is, on the whole, a charming book. The first half somewhat more so than the second half. The set up, Martha and Mayland’s developing relationship, is delightfully engaging. Once the chase for Elizabeth starts, however, the tone of the book shifts. After a few clues are followed, and it starts to become clear what the mystery is, Martha is relegated to damsel in distress. Her ending seems unworthy of her character and is a sour note in an otherwise sweet tale. I especially enjoyed the descriptions of how Mayland responds to sunlight.

This is one of the books given to me by my emigrating friend and I picked it out of a stack because of the cover. I like the picture of the dragon statue. Surprisingly, it matches the description inside the book. Tea with the Black Dragon is interesting and unusual and worth a read. 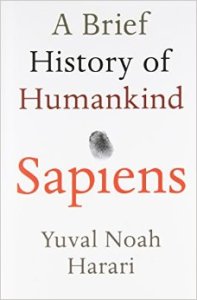 Sapiens: A brief history of humankind is a very interesting book that challenges a lot of received wisdom about humans – what we are, why we do what we do, how we got to this point in history. Harari is a historian but this isn’t the history of a specific set of humans in a particular time and place. It takes the bigger picture view of anthropology and merges it with the storytelling of history. It’s a big, 500 page book covering some complex topics, yet it remains an easy read. I found it thought-provoking, amusing in places, and some of Harari’s theories are extremely plausible.

There was something horrifying and depressing about it though. As a species, homo sapiens sucks. We destroy everything we come into contact with and spend our time working out ways to do that even more efficiently. It didn’t leave me with much hope that homo sapiens can change.

Despite that, this is a fascinating book and I’d recommend it to everyone. 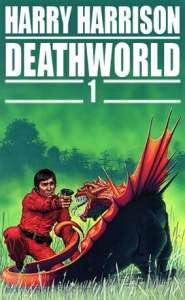 Humans have colonized many planets in the galaxy and in most places they live in sealed bubbles that provide a breathable atmosphere. But on one planet, life has become nothing more than a daily fight for survival. Every living thing on Pyrrus seems intent on destroying humans. Fast evolution provides all plants and animals with poisons, weapons and armour and the single-minded desire to kill people.

Jason dinAlt has a bit of psychic ability which he uses to make a living as a gambler and con-man. He’s approached by the ambassador from Pyrrus, Kerk, to use his skills to increase their money. Intrigued by the man and what he says about the planet he’s from, dinAlt can only see the challenge. He ignores the warnings everyone gives him and convinces Kerk to take him back to Pyrrus. He spends months in ‘school’ with Pyrrus’ children where he learns how to respond to the many deadly things that want to kill him. Eventually, he persuades them to let him out where he finally grasps his arrogance. From there he gradually learns what the inhabitants of Pyrrus can’t – why the planet is responding in this way.

There was a lot to like here. This is very much fiction of ideas; character development is sacrificed to plot and theme. It’s very fast paced and I liked that. I enjoyed the exploration of militarist culture and the impact that has on people. These are ideas and experiences that are relevant in any time.

Sometimes the trope of outsider coming in to solve the natives’ problem is paternalistic. In this case, I think the realistic depiction of Pyrran society helped avoid that. The people are so completely consumed by survival that they can’t spend time thinking about the bigger picture. Thinking is a luxury when your every waking moment has to be dedicated to staying alive.

My only criticism is – where are the women? It’s not even that the major characters are male, it’s that there is only one woman to be seen at all. The pilot of the Pyrran transport ship, Maya, is female and she gets as much character development as any of the male characters (which is to say, very little). She’s tough, smart, sexually confident and as capable as any of the men. Which is great. But she is the only woman in the book. The croupiers in the casino are male. All the children are male. The librarian is male. There’s another society of humans on Pyrrus who’ve learned to live in harmony with the planet (ish) and dinAlt spends some time with them. No women are mentioned. Where do the children come from? We talk a lot about the lack of gender equality in modern SFF and Deathworld puts this into context somewhat. Women are irrelevant to the human story in this book, as in anyone not white or straight. Fortunately, it’s fun enough despite that.

I suspect I might be talking about these issues a lot as I work my way through book mountain.