This book was given to me by the author. This summer I went on an Arvon course on Science Fiction and Fantasy writing led by Emma Newman and Peter Newman. The week is mornings of workshops, afternoons of working on your project, and evenings of readings. On the first evening the tutors read from their own work and then generously gave us each a copy of one of their novels.

After Atlas by Emma Newman is set in an frighteningly plausible future dominated by corporations where advertising is omnipresent and indentured servitude has made a return. Carlos Moreno is a detective, but he is indentured. He has a contract which he has to work off before he can be free. In this story, Carlos is asked to investigate the murder of the leader of a cult called the Circle, from which Carlos escaped when he was 18. It was this escape that led to his capture and slavery. Returning to the Circle to solve the case stirs up a lot of memories, and the cult is not what he thought it was.

The future imagined in this book is an extrapolation of neo-liberal economics and its impact on democracy and any parts of life that are not economic. It is extremely unequal and highly surveilled. Almost nothing a person does goes unnoticed and privacy is reserved for the very rich. I liked the way it was handled and found it believable. I think the question of the balance of convenience and privacy is interesting. The concept of privacy is really a quite modern one. Centuries ago when people lived and worked in the same place all their lives everyone in the village knew everyone else’s business. Living in cities has given us a sense of anonymity that we’ve grown used to and are reluctant to give up.

The other thing I liked about this book is that it is a diverse cast of characters at all levels. A lot of this was done in a quite subtle way and I was a good way through the book before I realised it.

After Atlas is a science-fiction crime thriller, a genre of which I’m fond. It’s fun, and while it touches on some quite serious and weighty topics, it does so with a very light hand. Emma Newman is a good writer and this is an easy and engaging read. I liked it a lot. 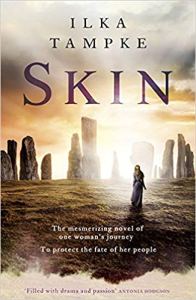 Skin by Ilka Tamke is the first in a fantasy trilogy set in Britain in the early 1st century AD. Ailia is a child without skin, which means she doesn’t know her place in the world. Rome is poised to invade and the Britons are divided between those who would fight and those who would make peace. They are waiting for a spiritual leader. Ailia undergoes several trials and may be the one they are waiting for.

There’s quite a bit I liked about this book. The cover is beautiful and is a good representation of what the book is like. It’s in first person and set entirely in Ailia’s head, which means it’s not always clear what is going on because Ailia is young and doesn’t know who can be trusted. The worldbuilding is really great and the setting is brought to life with a mystical touch.

But, I wasn’t hugely engaged with the characters and the story. The ending sort of fizzled out. It is the first in a series, but even so, the ending felt as though the story just stopped, rather than coming to any resolution, and unfortunately didn’t set up any desire for me to find the next book.

The cover says it would suit fans of Game of Thrones which I think is a bit misleading. If you’re looking for hard-bitten political, dynastic fantasy, this is not it. Skin is an emotional, mystical story. It’s worth a read if that’s your cup of tea.