If you have ever wondered why some people respond to the suggestion that something they’ve said is racist with outrage over the implication that they could ever be racist rather than with a desire to understand why, make amends and educate themselves, this book will help you understand.

White Fragility: Why it’s so hard for White People to talk about Racism is written by Robin D’Angelo, a white person with decades of experience delivering racial justice training to organizations. Throughout that experience she has met with responses that are familiar to me, and probably many other people. These responses generally go along the lines of ‘I define myself as not-racist, so therefore nothing I say or do could possibly be racist’ and ‘You saying something I said or did was racist is far, far more offensive and harmful to me than the racist thing I said is harmful to someone else, and therefore it is much more important for me to defend myself than to entertain the idea that I inadvertently said something racist’. What we’re not talking about here is the overt sentiments and statements of someone who consciously identifies as a white supremacist. We’re talking about progressives, moderates and conservatives who truly believe they are not racist (and certainly don’t intend to be) but who do not understand how growing up in historically racist societies have embedded attitudes and language that have their origins in racist ideology.

For me, knowing that I grew up in a country with an imperial legacy that used racist ideology to justify its exploitation of non-white peoples, some of which was enshrined in law, and lots of which was embedded in literature, art and other cultural media, makes it seem pretty obvious that I enjoy privileges that I wouldn’t have if I weren’t white, and pretty obvious I might not be fully aware of all the racist opinions and beliefs I’ve absorbed from my culture. Of course I would be horrified if someone told me I’d said something racist and probably my first instinct would be to be defensive (isn’t it always?). But I like to think I could move past that to apologising and figuring out what was behind what I’d said so that it didn’t happen again.

D’Angelo’s book pulls apart the various factors that lead to a different response and it’s illuminating. Central is the idea that we like to see ourselves as good people and the definition of a good white person currently includes not being racist. This means that being called out for saying something racist is an identity threat – to which people tend to respond with some emotional heat.

I found the discussion on how white people are taught about their own history or, more to the point, not taught interesting. When I was at school I learnt about a sanitised, positive British empire focused on exploration, adventure and discovery, and it wasn’t until reading more as an adult that I began to understand what empire was really all about. Even if a white person grows up in an area where there are lots of non-white people, that doesn’t mean we understand anything about the social construct of race and how it impacts people, because it is not openly talked about in the arenas most white people get their information. Also interesting is the information about how classifications of someone as white – in order to determine who was eligible to own property – developed and how convoluted they became, all in the service of restricting wealth and privilege to a small minority.

Reading White Fragility gave me a lot of insight into why it is actually so hard to shift the systemic disadvantages/privileges associated with race and to create more equal outcomes and opportunities for people. It also gave me better ways to talk about these things. Highly recommended. 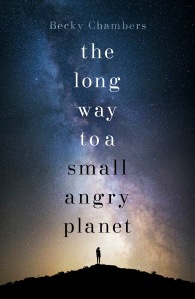 The Long Way to a Small Angry Planet by Becky Chambers is about a crew of space tunnellers who are offered the biggest job they’ve ever had: to travel to the edge of civilized space to a small, uninhabited planet that is pretty much entirely made up of the fuel used to power spacecraft and tunnel their way back. The trip to the planet takes about a year and creating the tunnel will reduce that trip to a day.

This is very much a character driven novel and the bulk of it is spent on the year travelling to the small angry planet and using that as a vehicle to explore ideas about relationships. Those relationships are personal, cultural and societal. The crew is multi-species and the relationships are multi-dimensional; interspecies, same-sex, human-AI, friendship, sexual and romantic. There are a lot of ideas in the book about gender, sexuality, sentience and love. Mostly they are handled well, creatively and vividly realised, and it is refreshing to read sci-fi that is actually addressing the possibilities of connection rather than just treating contemporary norms around relationships as though they are biologically determined (and therefore unchangeable) rather than cultural.

On the larger scale, there are ideas about how people fit into societies and the tension between collectivism and individualism. This is in the background and provides context for the personal relationships. There are themes about conflicts between and within cultural groups and when the crew reach the small angry plant, we see big politics at play that reflect colonial histories and current world dynamics. Some of this is less well handled than the personal relationships.

The Long Way to a Small Angry Planet was a little slow for my tastes. There’s a bit of action at the end when the crew are attacked when they start to tunnel but most of the book is about people relating to each other. It’s worth a read for the ideas explored in it and those who prefer more character-driven fiction may well enjoy it more than I did.

Talking about the Elephant by Lupa is an anthology of essays on neopagan perspectives on cultural appropriation. The essays cover various paths from Celtic Reconstructionism to Egyptian mysteries to eclectic paganism.

Cultural appropriation is where members of a dominant culture take sacred aspects of another culture and appropriate them for aesthetic purposes. A good, and recent, example is white people wearing traditional American Indian headdresses. Each feather in a warbonnet means the person wearing did something. It’s like wearing medals you didn’t earn. Members of the tribes of American Indians are very vocal about the appropriation of their sacred rites, such as dream quests and sweat lodges, and the people who use them without understanding the culture. They make the very valid point that religion is about community and you can’t separate the practice from the life.

Neopagans draw from any religions going – including the dominant Abrahamic religions – and they do it with the full range of motivations. Some neopagans are all about community and some are all about the individual connection with the divine. These essays are from people practicing various paths and talk about their experiences of cultural appropriation. In many cases, that means working through a rationalization for doing whatever you want and not feeling guilty about it. There is an interesting discussion about academic bias and lots of tidbits about various traditions and where symbols are derived from. While the essays are engaging and, I believe, genuinely try to tackle the issue, this anthology feels like it failed to get to grips with it.

I don’t know what the answer is here. I understand the desire not to give up the objects and activities that you’ve become attached to and have a connection with. I also feel that’s it’s not enough to say, well it’s ok to violate the living culture of a people who have been colonised and are still experiencing oppression so long as you do it respectfully. Maybe, the answer is to address the social issues that make cultural appropriation so harmful.

I’m interested in identity and exploring aspects of personality and how we play parts in the various areas of our lives. All of us have different ways of being depending on the situation we find ourselves in. Who I am at work is not exactly the same as who I am with family, or with various groups of friends. For some people the differences are subtle and more about emphasising certain qualities than about being a completely different person. For others, it’s more a matter of playing a part. In my roleplaying group, I’m interested in how much the characters we create are related to who we really are. So, The Functions of Role-Playing Games: How Participants Create Community, Solve Problems and Explore Identity by Sarah Lynne Bowman really appealed to me. 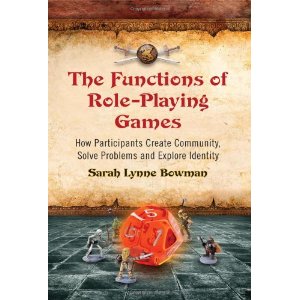 The book covers the evolution and development of roleplaying, both as a leisure activity and as a training tool in military and corporate environments. It looks at the skills that can be developed and how scenarios can be used as learning tools, and refers to studies that show that learning through simulations or role-playing is more effective than book study and classroom teaching. Bowman also considers the link between play and learning in childhood and the social pressure to move on from these activities in adulthood, and what we may lose from doing so.

Bowman considers live-action roleplaying, tabletop roleplaying and computer games with roleplaying elements. She looks at the two dominant systems, Dungeons & Dragons and World of Darkness and uses personal examples to demonstrate her points. Bowman has conducted in-depth interviews with a small number of long-term roleplayers, examining their experiences and the benefits they get from roleplaying.

The book as a whole was very interesting and I found it more readable than I expected to. The part I was especially drawn to was the discussion of the types at the end and the different ways in which ways of being can be explored. My observation is that some people engage with this more consciously than others and that I can see that in future I might use these ideas to explore certain themes and concepts. I would have liked more quantitative data, but I appreciate that the studies haven’t necessarily been done. I would also have liked more in-depth consideration of the nine types of character, as I found them disappointingly brief. These things aside, I really enjoyed this and would recommend it for anyone interested in psychology and identity.