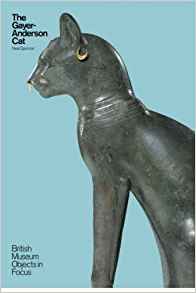 The Gayer Anderson Cat by Neal Spencer is part of the British Museum’s Objects in Focus series. So far, I’m enjoying the series immensely. There’s something very satisfying about a short book packed full of stuff I didn’t know before.

The Gayer Anderson Cat is the familiar, well-known cat statue from Ancient Egypt. I was surprised just how much isn’t known about the statue. It was acquired by Gayer Anderson, an art and antiquities collector in the early 20th century, who purchased objects from dealers on a regular basis but no information about where it came from or what it was for came with it. Thousands of cat statues were created in Ancient Egypt: there is evidence of workshops churning these things out and the book covers the excavations of some of these workshops. How they were used and who by is more mysterious. The Gayer Anderson Cat is the finest example of the type in existence so an assumption is made that it was paid for by someone wealthy and dedicated in a temple, but that is still conjecture.

New technology can tell us a lot about how it was made from the casting technique to the effects of the chemical composition of the metal. It can also reveal more detail on the surface of the object than is visible to the naked eye. The book goes into this in some detail. X-rays have revealed that there are repairs around the head and show how they were made.

These books are delightful. I like the intense focus on one small thing and what it tells us (or what we have projected on to it) about the lives of people who lived thousands of years ago. 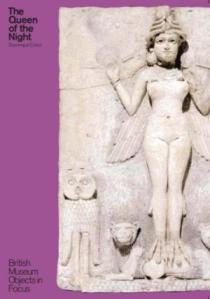 The British Museum has a series of small books focusing on a single object. One of these is on my absolute favourite object in the museum, the Queen of the Night plaque, from Babylonia.

The Queen of the Night by Dominique Collon spends a little time talking about where and when the plaque was found and its history with the museum. Most of the little book (they’re only about 40 pages) discusses what the plaque might represent. Given the location of the find the Queen of the Night is likely to be a goddess and there is some debate whether she is Lillith, Ishtar or Ereshkigal. The symbolism seems to point to the latter, but there’s actually no way we ever know what the plaque really depicted or what it was for. 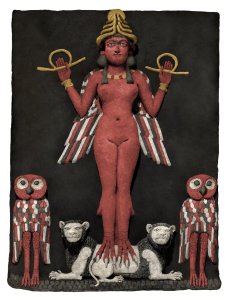 The plaque has microscopic traces of paint on it and so a reconstruction of what it would have originally have looked like has been created. Which is very cool. I imagine it would be quite striking in a dark temple lit only by candles.