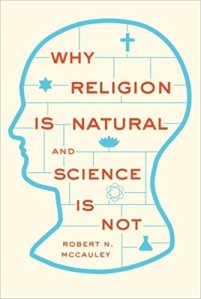 Why Religion is Natural and Science is Not by Robert N. McCauley is an exploration of how cognitive processes predispose us to religious thought and feeling, and make science very difficult for us.

I picked up the book after visiting the excellent Living with Gods exhibition at the British Museum. I find the psychology of faith, superstition and religion fascinating. McCauley’s book is not for the faint-hearted. This is a difficult read. The first half, where McCauley lays out the theories of cognitive processes that underpin his argument, is especially hard going. I don’t have much knowledge of the work in this area and I think it is quite hard to make it accessible to a layperson. Once you get through the theories of cognition, the second half of the book is relatively more digestible. I still found myself having to re-read most of it, but there were whole pages I could absorb in one go.

The argument is that, although some form of religious belief appears to be present in every society for which we have archaeological or anthropological evidence, there’s no specific thought process for religion. Instead it is a by-product of processes we use for much more mundane things like dealing with other people, not getting eaten by predators, and avoiding contamination. Religion comes from possessing a theory of mind and a tendency to ascribe agency to everything. Science, on the other hand, has only appeared in a few societies and requires writing and substantial expensive infrastructure to survive. It requires us to learn how to think in a way that is continually challenged by our natural cognition.

McCauley draws a distinction between everyday religion (what people actually practice) and theology, and a distinction between popular understanding of science and the practice of it by people who dedicate their lives to it. He also draws a distinction between science and technology, and gives many examples of where humans develop technology they can use without understanding how it really works. The argument also explains why we’re so fond of conspiracy theories, prone to ascribing intention to others without evidence, and why we make both science and atheism into a form of religion. Science requires us to be perpetually uncertain because even when there is a lot of evidence to support a theory there always remains the possibility that new information could change that. Human brains aren’t keen on uncertainty.

This is a very interesting book and I would recommend it, with the caveat that, unless you’re already working as a scientist, it’s a tough read. I do feel much cleverer for having read it, which is a quality I enjoy in a book.