I picked up The Dead of Winter by Christopher Priestley in the 99p kindle sale. Priestley has a column in the British Fantasy Society magazine and I was interested to read his work. 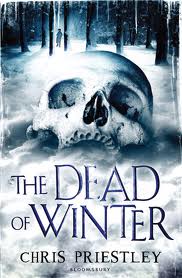 This is a classic style ghost story. A young boy, Michael, is orphaned and sent to live with a mysterious benefactor in a creepy, isolated house in the fens.

Michael’s benefactor is a sickly man whose wife died and who now lives there with his brittle sister, and some humble and friendly servants. From the start, Michael sees things that can’t be explained, scary things that others don’t see.

As he tries to work out what is going on, he unravels the terrible secret at the heart of the house.

I found this novel short and not very scary. It was ok, but very much a Victorian ghost story which isn’t really my thing. When I went looking for the picture for this post I stumbled across another review that said the book was aimed at children, specifically eight to ten year olds. Seriously, these things should have some sort of label on them. But, with that perspective, the things I didn’t like about the book make a bit more sense. If you know someone with pre-teens who like a bit of horror, this would be very suitable.