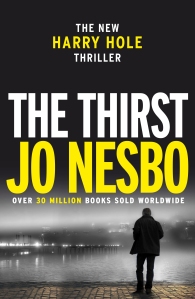 At the moment I am mostly reading non-fiction, because I’m working on a novel and it seems to go better if I don’t get caught up in stories. However, I am reading a few novels and The Thirst by Jo Nesbo is one of them.

Jo Nesbo is one of my go-to easy reads. I know what I’m getting and I know I’m going to enjoy it. I’ll get swept up in the story, and it will be engaging without being hard work. The Thirst did exactly what I wanted from it when I bought it.

A rapist and killer that Harry Hole failed to catch in the past is now active again and seems to have raised his game. There are plenty of twists. The identity of the killer is known from fairly early in the book; he even has point of view chapters, but even so, Nesbo manages to cast doubt at various points, making the reader question what they think they know.

I like way the theme of addiction in the Hole novels. Hole is an alcoholic which is a cliche for detectives these days, but it is lifted by Nesbo with the parallel with addiction to his work. Is alcohol really Hole’s addiction? Or is it his coping strategy for his addiction to chasing serial killers? This has been present in all the novels, but becomes much more central in The Thirst. Harry has retired and is now a lecturer at police college. He doesn’t drink. His life is satisfying and orderly and things are going well. But the reappearance of this killer and his return to the chase throws everything into disarray. All the elements in his life that represent success are threatened.

I feel like it could have done with a bit of an edit. It was overly long in places. Even so, I enjoyed it and if you’re already a fan, it won’t disappoint. If you’ve never read any Jo Nesbo, I’d start at the beginning of the series. 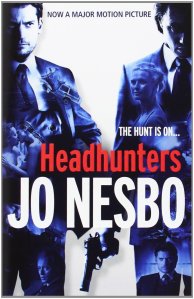 In Headhunters by Jo Nesbo, Roger Brown is a top recruiter who finances his lifestyle by art theft. He arranges interviews for executives who own expensive art and steals it while they’re occupied. He’s a successful recruiter with a reputation for never failing to place his candidate, but it doesn’t make enough money to pay for the house and his wife’s art gallery.

Unfortunately for him, a psychotic ex-CEO of a defence company wants a job with another defence company and is willing to go to any lengths to get it. Through a series of misunderstandings and bad decisions, Brown ends up being hunted through Oslo.

I saw the film of this book a few years ago and it’s what prompted me to read Jo Nesbo’s books. I actually read quite a few of his Harry Hole series before I got onto Headhunters, and I enjoyed them a lot. This is even better. I think this is the best of his that I’ve read. It’s written in first person from the point of view of Roger Brown and the voice is engaging and compelling. The plot tension is handled well and a couple of key twists are held back to the very end. Pacing is fast but not breathless. At least half the book is spent on the set up and you’re completely caught up in Roger’s world. He’s not the nicest guy but he’s smart and ingenious and not above doing whatever he has to. I liked it a lot.