The Fort is a rare standalone novel from Bernard Cornwell. 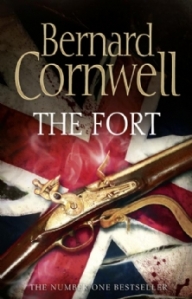 It tells the story of an early engagement in the American War of Independence. On paper the battle should easily have been won by the Americans but it turned out to be a victory for the British.

It is very closely based on fact and Cornwell manages to bring alive the cast of characters and show how personality can make a huge difference to the outcome of a fight like this.

It’s not his best work. Of course, it’s not bad by any standard, but I’ve come to expect more from Cornwell. I think it would have benefitted from another editorial pass. There were a lot of dialogue tags which I haven’t noticed in his writing before and I feel that had it had one more rewrite these would have come out. Because of that it feels rushed.

Otherwise, this is an episode of history I knew nothing about and I enjoyed the telling of it. Cornwell is very balanced in his presentation of what happened and it is hard to pick a side. There are sympathetic characters amongst the British and the Americans. I liked it, but it’s probably one for the fans.

One thought on “The Fort”