Another in my list of feminist classics I should have read but haven’t: The Golden Notebook by Doris Lessing. It is the story of Anna Wulf, who has written a novel that was a huge success but she finds herself mentally and emotionally stuck afterwards. There is something about what she has written that disgusts her and she struggles to bring that into her conscious understanding. This is the subject of Free Women, the shell story, and it is told through Anna’s interaction with her friend Molly, their children and the men in their lives. 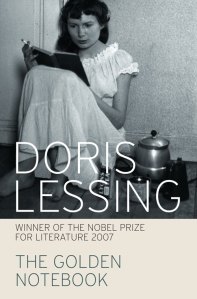 Within this, Anna writes in four notebooks. A black notebook records her writing life; a red one her political views and experiences; a yellow for her emotional life; and everyday events go in a blue one.

The black notebook explores the experiences in her life that her novel was based on, how she feels about those events now, and how she responds to other people’s responses to her work. Anna gradually uncovers what makes her feel so ambiguous about her work.

Anna is a communist and a sometime member of the British communist party. The novel is set in the fifties and refers to formative experiences in the forties, so Anna’s communist beliefs were arrived at in a time before Stalin’s abuses were widely known. In this notebook she explores her disillusionment and disappointment politically.

The last notebook, blue, records every day events, sometimes by Anna writing and sometimes she pastes in newspaper clippings.

Finally, after several years, all the threads of Anna’s life come together in a gold-covered notebook and she finds a way to move forward with her life.

I thought I would find this hard-going, but it’s not at all. It was deeply engaging and beautifully written. I found it enjoyable and I really connected with a lot of elements. Structurally, it was interesting. The use of the notebooks to split out the threads of Anna’s life meant that there was a fair amount of jumping back and forth in time and the same events appear in more than one notebook. This creates a disjointed feeling that mirrors Anna’s mental state.

One thing that was interesting was the feminism. The book is called a feminist classic, but Lessing has gone public with a denial that she is a feminist. In the edition I read there is an introduction in which Lessing addresses this discussion around the novel. What I found astonishing, and kind of charming, is that Lessing says that she’s not a feminist because she believed the equality of women (and various other equality issues) was so obvious that it would be resolved by the end of the 20th century. Clearly, it’s a far more intractable problem than she thought.

I would argue that The Golden Notebook really isn’t that feminist. It is in the sense that it’s a book about a woman who has a fully rounded life and is a single woman – a free woman in the book’s terms. However, aside from Molly, Anna has no close female relationships. In fact, she’s aggressive and competitive with other women. It’s feminist in the sense that the vile attitudes of the men in her life are sharply delineated, but not in the sense that Anna constantly defines herself, and allows herself to be defined, in terms of her relationships with men.

It is more than that though. It is also about mental illness, political ideology, and the writing process. Lessing’s introduction says that throughout the time the book has been in print it has been interpreted through all these lens, but never as a whole. It’s a greatly thought-provoking book and I feel intellectually enriched for having read it.

One thought on “The Golden Notebook”