Ah, Jack Reacher, I just can’t stay away from you. And in Worth Dying For, Lee Child’s taciturn alpha male itinerant troubleshooter/maker is on good form. 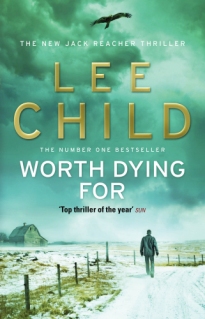 Reacher is hitching across the US, as is his wont, and is dropped off in the middle of the desolate plains of Nebraska. He finds a motel and walks into a village terrorised by the Duncans, a family of thugs who deal in human trafficking.

The battered wife of the youngest Duncan calls the drunken doctor drinking at the motel bar and Reacher, having a chivalric moment, drags the unwilling doctor to assist, then tracks down the husband and breaks his nose. As things start unravelling, Reacher discovers that the Duncan’s are implicated in a thirty-year old case of a missing girl.

Meanwhile, the Duncan’s are waiting for a shipment that is late. The buyers have sent a couple of guys to find out where it is. There are further buyers in the chain, who also send thugs to expedite the process.

After much chasing around windy, flat farms and the grisly, violent deaths of many a criminal, Reacher solves the case and the bad guys get their just desserts.

I think Lee Child is getting better as a writer, Reacher seems a more complex character than when I first picked up one of these books, and as he gets more complex he gets more likeable, which was definitely missing at the start.

I also appreciate the short time span the novel is set in. All the action happens over a few days, maybe a week. With Reacher able to have many adventures in a short space of time, he doesn’t age at the same rate as the reader. Which can be a problem with your action hero. Worth Dying For has all the strengths and weakness I’ve come to expect from Lee Child. What’s good is the plotting, the pace, and the creation of a insulated little world wrapped up in its own problems. Not so good is the dialogue and Reacher’s god-like powers. Still, all in all, it was fun and if you’re looking for an easy, relaxing read, you could do worse.