I was reading articles about worldbuilding on Fantasy Faction and one of them mentioned Kushiel’s Dart by Jacqueline Carey. It was an example of how changing something in your fantasy world has ramifications that ripple through the whole society. In this case, a religion that sees sex as a sacred act, as a way to worship, and commune with your god. 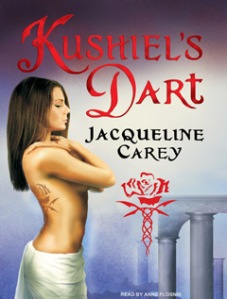 Kushiel’s Dart is the story of Phedre told in first person memoir-style. It’s not my favourite style but for at least the first half of the book it is done very well. Phedre is telling the story of her childhood; how she was born into the service of god and how she learned what she was. She is an anguisette, a woman who finds her sexual satisfaction in experiencing pain. This is something in great demand as it is something beyond the ordinary sexual submissive.

But rather than be dedicated to a house of service, Phedre is bought by a court noble, Delauney, and trained by him to be a spy. He knows what she is but does not allow her to lose her virginity until she is eighteen, much later than it would have been in a house.

Delauney is killed and Phedre finds herself thrust into the contest for the throne of Terre d’Ange. She is betrayed, sold into slavery in a barbarian country, discovers a treacherous plot, escapes, and returns to the Queen. She becomes the Queen’s emissary and then is central to forming the alliance that saves the Queen and foils the plot to overthrow her.

For the first half of the book the language is rich and extravagant and suits the story very well. It’s engaging. Phedre is a little annoying; she’s arrogant and self-satisfied. But I’m happy to be interested in unlikeable characters. Once the story gets past Phedre’s childhood and her training with Delauney, I found I was enjoying it much less. The language and style wasn’t consistent throughout the book. About halfway through the language became more plain and I felt the book lost something.

Mostly, the reason I was frustrated was that there was a lack of conflict. Everything comes a little too easily to Phedre. I didn’t find the psychology of the characters believable and felt that the courtly intrigue was shallow. There was no real depth, no real danger. And then, I was a little disappointed in the depiction of Phedre as an anguisette. It was built up extremely well in the first half of the book. I couldn’t wait to get to the good stuff. Unfortunately, it didn’t deliver.

I also didn’t think it really stood up as the example of worldbuilding it was supposed to be, but that’s hardly Carey’s fault. It’s more of an alternate history than a fantasy. I didn’t actually finish it. According to my kindle I got 95% of the way through but I couldn’t bring myself to read the last few pages.