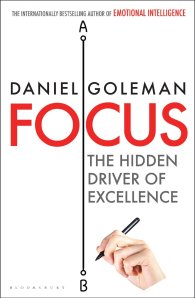 Focus by Daniel Goleman is about awareness. There are three levels of awareness and if you can master each and master switching between them appropriately then excellence will be yours. Assuming that’s what you want.

The three levels are: awareness of your inner state; awareness of what’s going on between you and other people; and awareness of the wider world. Lots of this happens in your subconscious because your brain isn’t under your control. You are the narrator for the adventure your body is having. But if you can manage to stop distracting yourself with sensation and pesky emotions and actually pay attention to what you’re doing/experiencing in the moment, you’ll be happier, more productive and achieve all your goals.

There’s a lot of good stuff in here, although not much that’s new. Goleman spends quite a bit of time talking about emotional resilience and the importance of learning to distract and soothe yourself. He also talks about the need to scan and take information in so that your subconscious can do the heavy lifting of making connections between unrelated things that is key to creativity. There’s a difference between focussing narrowly on a task at hand to get it done, and a more wide-ranging focus on gathering data, and how both are necessary. Goleman also talks about when it’s helpful to be unfocussed, because that too is important in creativity. Mindful daydreaming, if you will.

I wasn’t keen on the tone. According to Goleman, the world is going to hell in a handbasket due to the pernicious effect of modern technology. And climate change, and obesity, and lack of wholesome outdoor pursuits. Everything was all better in the past when people had real conversations without texting someone else. There’s a lot of assumptions masquerading as evidence and a lot of nostalgia for a never-was golden era. Which rather spoilt it for me.