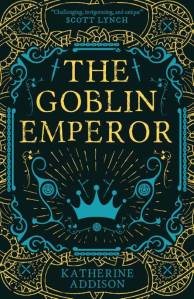 I picked up The Goblin Emperor by Katherine Addison after EasterCon 2019. I attended a session called Build your Utopia looking for a discussion about creating worlds where humanity’s best traits are foregrounded. I’m kind of sick of the narrative that people are awful and there’s no way to change that. The Goblin Emperor was given as an example of hopepunk, a genre recently emergent as a reaction to grimdark fantasy.

It’s not as if nobody behaves badly in The Goblin Emperor. Maia, the half-goblin fourth son of the Emperor of the Elf kingdom expects only to live out his life in isolated exile. Then his father and three elder brothers are assassinated and his world is turned upside down. Not everyone is thrilled about his ascension to the throne and he faces treachery and an assassination attempt on his own life as well as courtiers seeking to take advantage of his naivety. Maia has to adapt to a complex society that nothing in his life has prepared him for and learn who he can trust. Eventually, he finds his way to identify and remove most of his enemies, to decide what kind of ruler he wants to be (a good one, obvs), and set himself on a hopeful path. Some of the characters are venal, violent and prejudiced. Others are generous, progressive and trustworthy.

Part of the discussion in the session at EasterCon was whether the idea that conflict is story is in itself a form of cultural hegemony. That there are other story traditions that are devalued and ignored because they don’t follow the structure we’re most familiar with. It’s an interesting debate. The hero’s journey structure that so much storytelling in books, tv and film is based on makes it hard to explore some kinds of ideas and concepts.

I enjoyed The Goblin Emperor overall but I found it a bit slow. Also, I never really believed Maia was in peril. There was no point in the book where I doubted that Maia would succeed. I enjoy those moments in a book where you suddenly think it’s not all going to work out okay for your favourite characters. I’m not sure The Goblin Emperor has given me a taste for hopepunk. I love grimdark and, more broadly, I am a sucker for tragedy, but perhaps I should stretch myself and get out of my reading comfort zone.