This one is hot off the press! For me at least. Every so often a book comes out that I’m so excited about I buy it in hardback as soon as it’s published. I’m a fan of Joe Abercrombie’s work and his latest book, The Heroes, came out at the end of January. I bought it and read it immediately. 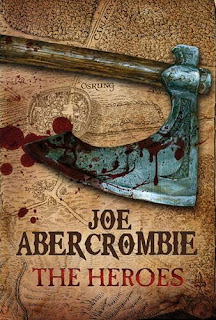 The Heroes follows three characters during a three day battle at a henge called the Heroes. Bremer dan Gorst is on the side of the Union, has lost everything and is trying to redeem himself through the only thing that ever gave him any sense of self-worth – fighting. Curnden Craw has been a warrior all his life and now he’s tired and struggling to work out what the right thing to do it. Prince Calder is a dispossessed prince trying to figure out how to make himself King of the North without doing any actual fighting himself.

This is a book about heroism in all its glory and stupidity. It’s also about the horrible reality that is lost in the glare of heroism but without which it wouldn’t be possible. Abercrombie pretty much does everything well but his stand-out skill is characterisation. His main characters are not always very likeable; what they are is identifiable. He reveals their inner conflicts, fears, self-delusion and insecurities in a way that opens them up to us as real people. We may not like them but we understand them. I particularly enjoyed the layering of Bremer dan Gorst’s crippling loneliness throughout his POV chapters.

I like the way the story uses several POVs. As well as the three main characters there are three minor characters who have story arcs through the book and a handful of others who get the odd occasion to talk. There is one chapter, called Casualties, where each scene is from the point of view of an individual who gets killed in one of the engagements. A character has a scene, is killed, and then the POV switches to the head of the character who killed them. And is in turned killed and the POV passes to the next killer. This lasts for six characters and the last is one of the main characters. I honestly didn’t know whether he would be last, or whether he would die. Abercrombie doesn’t necessarily keep his characters alive to the end of the book. He’s prepared to do what the story requires and my heart was in my mouth for the whole of that scene. Genius.

Abercrombie is a visual writer who creates scenes quite filmicly, probably as a result of his previous life as a film editor. His action scenes are full of detail, movement, and sensory information. The worldbuilding is good, but lighthanded, at least for me. I’ve read all of Abercrombie’s books and the world is familiar to me. My only criticism would be the lack of female characters. Abercrombie writes women well – meaning that he writes them as people who happen to be female – and has created some really memorable female characters. There were only two (aside from background characters) in The Heroes, who were great, but had small roles and I would have liked more balance.

The ending was really a mix of endings. Each of the six main and minor characters come to a turning point in their lives. Most get what they wanted but find that it’s not quite what they thought it would be. Two thought they wanted a life that was different from what they had, but when they get it, find that what they had was better. One finds that getting what she wants comes with a very high price. Another finds that getting what he wants doesn’t solve his problems or make his life any better. One gets what he thought he wanted but gives it up when he sees that what he wants really comes in a different package. And Sargeant Tunny finds himself right back where he started. I find it insightful and realistic. It’s satisfying because it speaks to emotional and psychological truth.

I loved it. This is modern fantasy at its finest. And I can’t wait for the next one. Highly recommended.