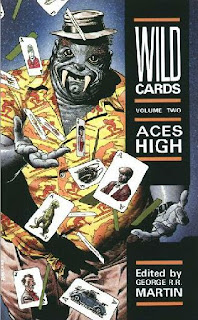 Aces High is the second in a shared world series edited by George R. R. Martin. It’s alternate history sci-fi which takes the 1950s as its jumping off point and postulates that a virus outbreak creates mutated humans. Some get superpowe

In the second book, set in the 80s, both aces and jokers are fighting alien invasion. It’s a series of short stories, written by a number of leading sci-fi writers, that builds up a story arc over the whole book.

I’m not really into superhero stuff but I quite like these. The writing is variable in style (not in quality) but all the stories blend well together. It has a kind of noir-ish feel, is a little bit pulpy and comicky, and is perhaps a little dated. But overall, it’s fun, lightweight, easy reading.