I picked up Irons in the Fire by Juliet E. McKenna at Alt.com a couple of years ago. Juliet McKenna does quite a few writing conferences and I’d heard a lot of what she has to say about writing and the writing life. I thought I ought to read one of her books. 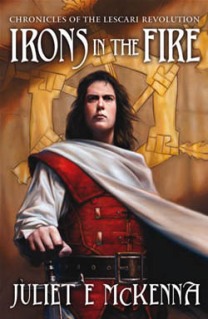 McKenna is published by Solaris Books and I guess I wondered what differentiated authors who are with small presses from those with the big publishers. In between buying this book and reading it I’ve read three Angry Robot books, all of which were excellent, so I’m not sure there are any conclusions to be drawn.
Irons in the Fire is the first in a trilogy. It is set in a fantasy world where the Kingdom of Lescar is being torn apart by incessant civil war. Many people have left or sent their children away, so there are substantial communities of Lescari in other countries. Tathrin is the son of an innkeeper sent to study in the city of Vanam in the country of Ensaimin. There he meets Aremil, the crippled son of one of the Lescari Dukes and find himself drawn into a conspiracy to bring peace to Lescar. Along the way, a small band of conspirators is drawn together, all with different agendas and Tathrin finds that he’s not entirely comfortable with some of the actions they take.
I think the problem I had with this book is that the characters were too ordinary. I didn’t enjoy it very much and found it hard to stick with. The writing is ok – it starts off a bit ropey but settles down quite quickly. It’s not great but it’s better than some books put out by bigger publishers. It was quite an easy read and the pacing was good. It’s seven hundred pages and, in terms of the time I spent actually reading it, didn’t take that long to finish. But I did put it down and read two other books before I made myself complete this.
So, I asked myself, what is it that’s missing? Why isn’t this engaging me? There’s two things; the characters and the world. I didn’t buy into McKenna’s worldbuilding. Perhaps it’s because I haven’t read any of her other books, which I believe are set in the same world, that I found that there were a lot of things left undeveloped. It just didn’t feel that solid. For example, there were gods, which I knew because people swore by them and there were shrines. But there was no information about how the gods related to each other, or to society, or about what impact religion has upon the world. It felt superficial.
Maybe that wouldn’t have mattered if I’d really liked the characters. It was difficult to feel anything about them at all because they were flat and ordinary and not well-drawn. The POV characters lacked passion and depth. There was much telling about how they felt that was not backed up in dialogue or action. The other main characters who didn’t have POVs were potentially interesting but just didn’t jump off the page. They were not characters who I would think about whilst not reading the book. Also, I think the guy on the cover is supposed to be Tathrin, but I think it says quite a lot that I’m really not sure. I can’t connect the picture on the front with the character in the book.
I won’t read anything else by Juliet McKenna and if you’re looking for epic fantasy, there’s much better stuff available. But I will give Solaris Books another go if I find something that looks interesting.