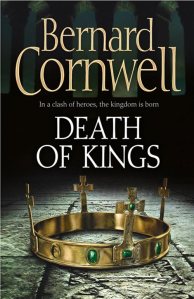 Death of Kings by Bernard Cornwell is the sixth book in the Making of England series. Or The Warrior Chronicles, or the Saxon Stories, as it’s also known.  There are at least two more to go.

Uhtred of Bebbanburg is forty-five and broke. All the money he’s ever made has been spent on keeping is oath to Alfred. There have been times when he’s been rich but this isn’t one of them. He still harbours dreams of returning to Northumbria to reclaim Bebbanburg but he doesn’t have the resources and he’s running out of time. Forty-five is old for a warrior. And then there’s the pesky problem of the promises he’s made to Alfred and Aethelflead.

This installment of the series does feel very much like a mid-series book. It’s a bit slow and not much seems to happen. Alfred dies, his nephew tries to steal Wessex from his son, and the Danes combine forces to attack. There’s the threat of betrayal from an ally and lots of riding around the countryside looking for people to fight.

As always, the writing is excellent, and Cornwell provides a masterclass in simple yet effective prose. The characters are vivid and Aethelflead had a particularly good part in this book.